Anne Allen: The girl who wouldn’t wear her star

While Shimon Gottschalk’s experiences with Nazi persecution ultimately led him to delve more deeply into his faith and become one its educators, for Anne Allen, born, Anna Veronika Berend in Budapest, Hungary, in 1929, the very opposite was true.

“For me, being Jewish meant humiliation.” Today at 87, the youthful-looking, 4’11”, great-grandmother is just as unintimidated as she must have been at 10 and 11 when the Jewish Laws were enacted in German-influenced Hungary.

“Because I was Jewish I was not allowed to go to school anymore with “Aryan” children.” She leans forward, “We would have contaminated them!” Allen recalls the pain of being unable to go to movies or restaurants any longer and worse, that her friends now “looked right through me…as if I no longer existed.” It is a hurt and anger that remains barely banked after all these years.

By late 1939 and 1940, being Jewish in Budapest meant that her father, a lawyer, began losing clients; that her mother, a concert violinist was no longer welcome in the symphony; and that her brother would assume a false identity to keep from being “recruited” to a labor camp. But for 10-year-old Allen, it is one scathing memory that embodies the iniquity of Jewish life in Budapest:

“With the canary yellow Mogen David (star of David) sewn over my heart, I was walking to my grandparents’ when an older man on the street stepped directly in front of me. Gathering a huge gob of spittle, he spat it directly in my face, calling me a “little rose of Sharon,” a term used sarcastically for a Jewish girl.” Allen remembers where the spittle hit and how it ran down into her mouth. She says she ripped the yellow star from her coat and ran home determined to never wear it again.

Hiding in the country

But a kindness given for a kindness received would give her a respite. Some years before, her grandfather, a kindly surgeon, had operated on a Christian farmer without charging a fee. Now, as most Jews were being ordered into ghettos, the farmer appeared at the doctor’s door offering him a place to hide in the country. Spending “half of their savings” on false identity papers, Allen says she and her grandparents went to live for the next few years in the country.

She remembers her name from that time: “I became Aranka Molnar, fourth generation Aryan!” Her parents were spared removal from their apartment because her father had earned a German Iron Cross in the First World War when Hungary was part of the Axis.

Yet, the fighting of this war had spread and now brought Hungary directly into the battles. No place was safe, even in the country. Bombs were dropped from Allied planes onto Budapest, but there were also many questions being asked about the “Molnars” in the country. It was decided they should return to the city before they were betrayed.

But much of Budapest was in ruins and it was the dead of winter. “I tried to repair the windows in my grandparents’ apartment,” says the ever-resourceful Allen. “They were all blown out and it was freezing. I found some of Grandfather’s old X-rays in the closet… the old kind with emulsion on the surface. I scrubbed off the black part and attached them over the windows… like panes, I thought.” Her grandfather, however, was furious that she had lost the important record of his patients. He’d had a fiduciary toward them. 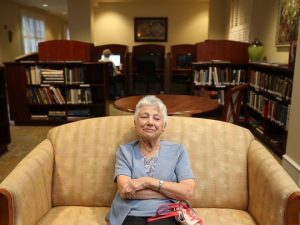 Holocaust survivor Anne Allen speaks to the Democrat from her home at the Westminster Oaks senior living center on Jan. 18. (Photo: Joe Rondone/Democrat)

“We were essentially living in the cellar by that time,” says Allen. “There were bombings four times a day leaving animals in the street and nothing to eat.” Food became so scarce that the now young teenager followed a group from her cellar that broke into a soup kitchen. She brought back two bags of “moldy, dried carrots and cabbage” — a prize for the family, though her father was angry at her theft. He presumably was more pleased when Allen had run into the street after a bombing raid and sliced off a tranche of meat from the hip of a dead horse. “I stuffed it in a bag of snow and brought it home!” Their first meat for weeks.

The German Army, which had occupied Hungary in 1944 and sent between 450,000 and 600,000 Hungarian Jews to death camps, were by the end of the year, in a life and death struggle, losing on all fronts. Finally, with the Germans on the run, in December 1944, Soviet troops marched into Budapest. They brought with them, and into the cellar where the feisty 14-year old Allen hid with her parents and other apartment dwellers — the final hell of war.

“The Soviet troops came down into the basement with their gun pointed at us. The first thing they did was scream in Russian, “Watches! Give us your watches!” And when we did, they pulled up their sleeves and laughingly, showed us watches to their elbows!” And then, one by one, they pulled three girls from their mothers, guns pointed at the weeping women’s heads, and took the girls away to rape them.” Allen said she was spared by the foresight of her mother, who had cut the girl’s long hair and made her wear her brother’s clothes and hat.

After the war, Allen eventually made her way first to London, and later to the United States. She would go on to have three sons, seven grandchildren and two great-grandchildren. The war had taken families she knew to gas chambers; resulted in the suicide of her brother, which she believed to be a result of its stress; and her boyfriend shot two weeks after their first kiss.

She also knows of hundreds of fellow Budapest Jews who were marched to the edge of the Danube in front of the city’s elegant Parliament building, stripped of their gold, then their clothes, shot, and shoved into the river by the next row of those about to be murdered. She knows, because her father, the honest lawyer, was later asked to represent the Hitler Youth who had perpetrated the crime. He refused.

An event as sweepingly heinous as the Holocaust, one which invades lives of generations both forward and back, which makes heroes, births villains, and forces ordinary people to question what they stand for, are willing to die for… and what they would do to survive… such an event makes its imprint in many ways.

For Allen, she “gave up being Jewish.” For her, “Jewishness” had not brought security nor safety. For the last 60 years, Allen has been a practicing Presbyterian and reared her children in its faith. Survival means many things to many people, and Anne Allen is, by any measure, a valiant survivor.

Reprinted from the Tallahassee Democrat