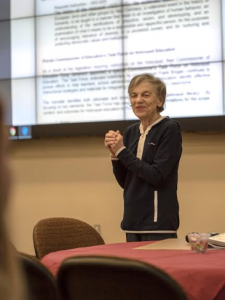 Special to the Chronicle

The Holocaust Education Resource Council (HERC) held their 14th annual Holocaust Educator’s Conference. HERC’s mission is to provide instructional guidance, support and resources for educators who teach the history of the Holocaust, and educational programs for the community at large.

The conference stretched from Thursday, June 8 through Saturday, June 10, 2017. The event was held at and partnered with Florida State University.

Barbara Goldstein, HERC’s executive director, said the goal of this year’s conference was to, “gain higher attendance by teachers and to provide valuable resources for Holocaust education such as films and books.”

There were 35 teachers in attendance.

This year, the conference was presented by Dr. Mary Johnson, a senior historian at Facing History and Ourselves. Throughout the three days, Dr. Johnson introduced a range of topics. She included ideas such as human behavior, preconditions for the Holocaust, voices and video testimonies, and the Nuremberg Trials.

On June 10th, Jan Munn, an art teacher from Chaires Elementary, led attendees in creating Holocaust Memorial stones. Eventually, the memorials will be displayed at the HERC building.

After asking attendees thoughts of the conference, Shekishma O’Reilly said, “I love the discussion on how to put this knowledge into practice in the classroom.”

Kimberly Morris stated that the conference was, “so very interesting and engaging.”

Overwhelmingly, those in attendance believed that more educators must attend and experience the conference firsthand.